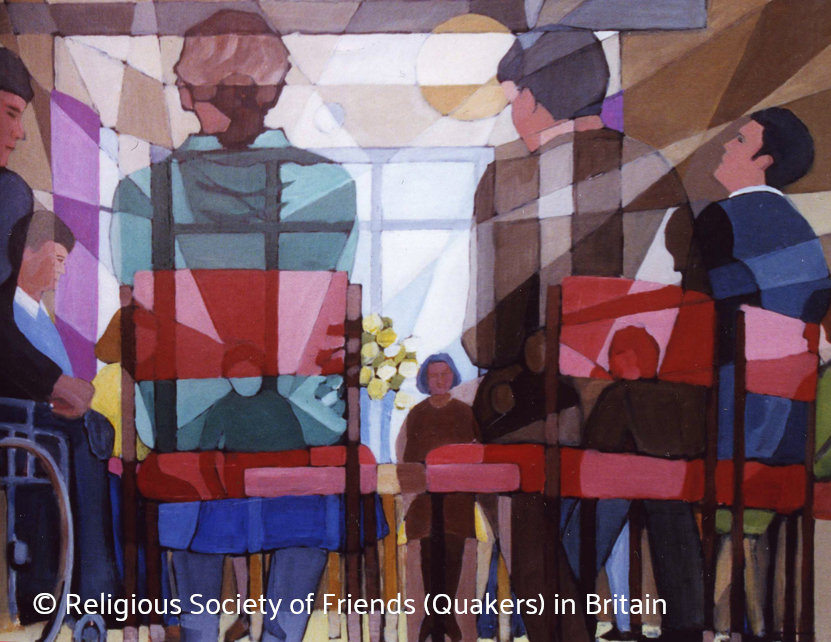 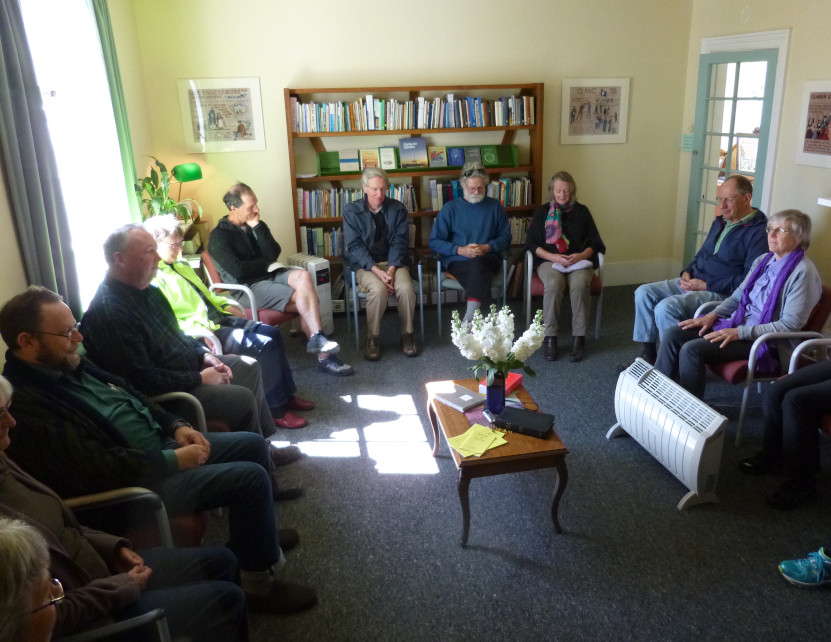 The Nelson Meeting gathers every Sunday at 10.00am at 30 Nile Street, Nelson. Friends in Motueka meet on the second Sunday of the month at 10am at the Family Service Centre, 27 Talbot St.  Meeting lasts an hour and is followed by Reflections (when you can speak about insights or revelations received during Meeting that didn’t make it to ‘ministry’, rather than a time for discussion. ‘Ministry’ is a message spoken by someone who is prompted by the Spirit to break the silence of Meeting).

We share notices of Quaker activities and other actions we support in our city and region, before a time of community over morning tea. All are welcome to try out Meeting for Worship without any commitment. If you decide to make Meeting your spiritual home we offer a safe, loving community.. We aim to help one another live better lives.

Each month we have a spiritual nurture group, called ‘Becoming Friends - sharing spiritual journeys’, which is open to all, including newcomers and enquirers. We meet at the Quaker Meeting House at 30 Nile St., Nelson, from 7pm – 8.45pm. We start with silent listening, we read and discuss Quaker ideas, and spend time sharing our experiences of our personal and communal spiritual journeys. There is time for people to share their life stories in an encouraging environment.

On the 3rd Wednesday of every month we meet in the home of the hosting Friend to discuss the topic of their choice. Topics have included Humility, Forgiveness, Living peacefully, how Quakers have fun, Think it possible you may be mistaken, Empowerment. The topic and venue are announced at Meeting for Worship and in our monthly newsletter.

Every two months we in Nelson hold a Business meeting to make decisions on such things as the maintenance of the Meetinghouse, national Quaker concerns, and to plan our activity. Its ‘proper’ name is Meeting for Worship for business – we seek spiritual guidance in the same way as we do in any Meeting for Worship. The meeting opens and closes with silence and each Friend’s contribution is heard with a short silence to consider its relevance. The intention is to discover the will of God, however that is conceived by each Friend. We call the person who facilitates these meetings a ‘clerk’. They put words to the process, drafting a ‘minute’ (a succinct statement summing up the emerging sense of direction) and seeking the meeting's confirmation that it accurately reflects the direction in which Friends are being led. Decisions are made not by voting nor really by consensus but by the meeting developing its understanding, until unity is reached. It may be that not everyone agrees, but they will accept it as the way forward. It takes patience and discipline to conduct Business Meetings in this way but the decisions made are strong.

Children are valued by Quakers and our testimony of equality applies to them too. Children call the adults of the Meeting by their first name and regard them as Friends, whatever their age. Children are welcome at Meeting for Worship. Even quite young children can cope with a short period of silence, especially when they see the adults and other children around them sitting quietly. Children may speak in Meeting for Worship if they feel they have something to say, and this is respected as is any other contribution.

Most Meetings, Nelson Meeting included, will have children join the Meeting for Worship for about 15 minutes, either at the beginning or at the end of the hour. For the rest of the time they have an opportunity to do art or craft work, to learn about Quaker history and values, get to know the other children and the adult helpers and enjoy a sense of belonging to the Quaker community.

Young Friends (YFs) are those over 16 who consider themselves 'young' (some may be in their 40s). There is an annual Young Friends camp and an online Meeting for Worship that links YFs around the country.

Junior Young Friends are aged 13 to 16. They also have an annual camp with YF and adult leaders and in larger meetings will have their own group on a Sunday. Camps are a great opportunity to learn from older Friends and to have a sense of identity among Quakers.

Even quite young children can cope with a short period of silence. 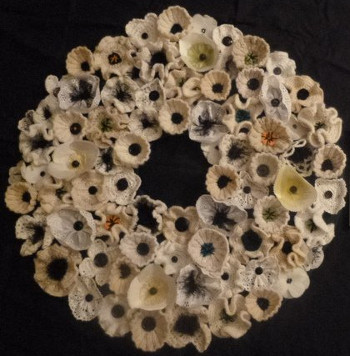 Friends in Nelson Meeting are active in: 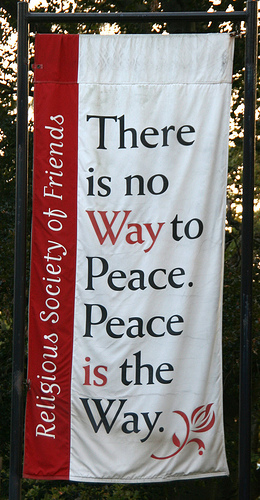 Peace: Nelson City has a long history of peace activism. The Peace Grove opened in 2016 records Quaker contributions to peace in Nelson. We have held peace vigils on Anzac Day evening, and to commemorate Hiroshima and Nagasaki Days. A Friend created a Peace Exhibition in 2015 to counterbalance the WW1 military celebrations, that was viewed by more than 100 visitors, and a White Poppy Wreath remembering all non-combatants killed during WW1 was displayed in the Christ Church Cathedral. It won international recognition when in 2017 it was chosen to appear in Friends World Committee for Consultation 2018 calendar. On November 11th 2018 we had a stall at the WW1 Armistice Day event in Trafalgar Street, Nelson to represent the voice of peace.. We ended the 2018 year with a Peace Picnic on Parihaka Day, November 5th, celebrating Peace in Whakatu, with exhibitions in the Nelson and Richmond Libraries relaying the history of Parihaka Day 1881, the reconciliation with the Crown in 2017, and the Crown apology to the people of Parihaka past and present. After a Dawn Blessing of the City on November the 5th we hosted breakfast in the Meeting House for those who attending the ceremony. We support the Parihaka Network Whakatu in organising these events. You can read about that on our Facebook timeline, Quakers in Nelson.

Child Poverty: We know that in the midst of Nelson’s beauty and bounty are those whose lives are marred by poverty. Our Meeting makes regular donations to Auckland Point School and its Young Parents School. This year the children in the Meeting made truffles as gifts for the students enrolled in the Young Parents School.

Support for Palestine: Our Meeting is allied with Te Tau Ihu Palestine Solidarity,  participating in events organised to educate people about the apartheid suffered by Palestinians and to rally support for the Boycott, Divest, Sanction movement. Quakers in Nelson resolved to boycott Israeli products as part of our support to the people of Palestine. We frequently post educational material on the plight of Palestinians on our Facebook page Quakers in Nelson @nelsonquakers. We are a member of the Interfaith Network of Californian-based campaigning organisation Jewish Voice for Peace, calling for international action to isolate Israel for its illegal occupation of Palestine and oppression of the Palestinian people. 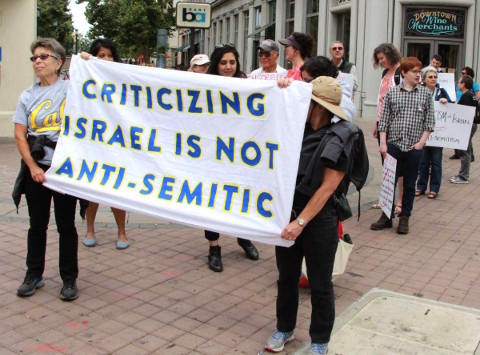 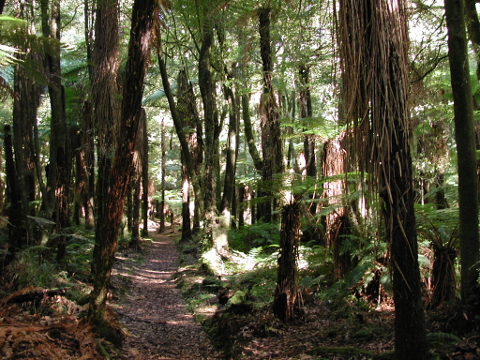 The Quaker Quest series of discussions have been held at our Meeting House at about 18 month intervals since 2007. They introduce how the Quaker speakers think about their topics, such as Christianity, the Bible, Meeting for Worship, Sex, family and relationships, Peace-making, Death and Dying, Sustainability, and Refugees. Attendees can share their own perspectives, and be part of a brief Meeting for Worship. The next Quaker Quest will be held in early 2019. To be notified of the dates and topics register an interest with info@quakers-in-nelson.org.nz 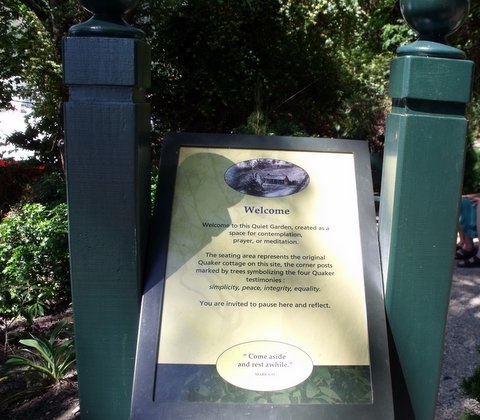 Three Quakers arrived in Nelson in 1842 as part of the New Zealand Company's settlement under Arthur Wakefield: Frederick Tuckett, Samuel Stephens and John Sylvanus Cotterell. All were surveyors with a keen interest in the new colony and in forming positive relationships with Maori. A farming family, Martha and Samuel Strong and their children, were also Quakers as was Isaac Mason Hill.

Sylvanus Cotterell was allotted an acre of land at 136 Rutherford St and an etching shows a cottage with a picket fence surrounded by farmland. Today that place is five minutes' walk from the centre of the city.

In 1843, while surveying in the Wairau area, conflict with Maori over land which had not been sold led to Cotterell's death along with 21 others, including Arthur Wakefield. Aged just 24, Cotterell was unarmed and is thought to have attempted to make peace in the confrontation. His last letter home spoke of his pleasure at having learned enough of the Maori language to be able to discuss spiritual matters with Maori friends. He is buried with the other English casualties of the incident at Tuamarina.

For a decade Cotterell's cottage stood empty. In 1853 Robert Lindsay from Brighouse Meeting in Yorkshire travelled to New Zealand to support local Quakers. Nelson Friends had been meeting in the home of Samuel Strong and his wife Martha. In consultation with the Strongs and Isaac Mason Hill, Lindsay bought Cotterell's cottage. With some modifications to the house and grounds it became the first Quaker Meeting House in New Zealand and a Meeting for Worship was held there on 15 May 1853. Six adults and three children were present.

The meeting appears not to have continued for very many years. Martha Strong died in 1854 and is buried in a small fenced graveyard on the site, along with Samuel who died in 1875 and two of their infant children. Frederick Tuckett returned to England. Isaac Mason Hill lived a long life as a respected member of the community with an interest in Maori welfare and education. He died in 1885 and is buried in the Baptist section of Wakapuaka cemetery. There is little known about Quakers in Nelson from those early times until the early 20th century.

Eventually the acre of land was sold, on the understanding that the graveyard would be maintained by Nelson City Council. In 2010, with funding and support from the community, Nelson Friends established a Quiet Garden on the site of the Meeting House.

In the 1920s and 30s a small meeting gathered in each other's homes. Theodore and Esther Rigg and their family were part of this meeting, having come to Nelson after their relief work during the First World War came to an end.

In the 1960s the present Meeting House, formerly the home of John and Enid Hazelwood, was left to Friends in Enid's will. It has been the Meeting House since then and is often noticed by visitors because it is in the central city, close to the Cathedral. Unusually, in Nelson Friends are called to worship by the Church bells!